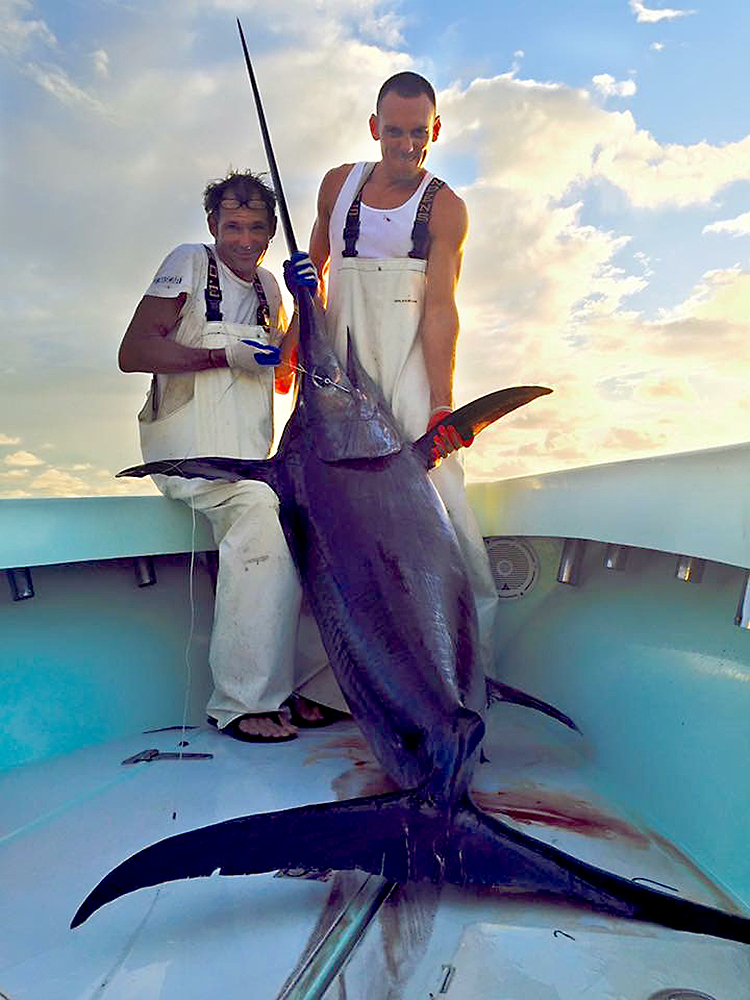 Swordfish, also called the Gladiator of the Sea, is one of the most elusive and sought after fish that is to be found in the South Florida.

On Day Trips we fish with bointo bellys, squid, mackerel, eels and dolphin bellys. In the day we fish directly on the bottom for swordfish, using a 8-14lb weight. We will most commonly use electric reels for this set up. We have a variety of electric reels aboard the Good Hit, we like to use an LP s-1200.

We always carry a Dawia Electric with has the ability to hand crank. Both of these reels are top of the line for this sport. On the Good Hit, we commonly fish in 1600ft-1800ft of water. To reach the Daytime Swordfishing grounds it takes 1 hour and 20 minutes.

On Night Trips we use squid, mackerel, or any sort of live bait. Normally fishing in 1100ft-1600ft of water, fishing the upper water column. Deploying the bait to depths of 100ft-400ft. Using glow sticks to give light to your bait. The average weight on swordfish is around 80lbs, with some swordfish exceeding 300 lbs.

On the Good Hit we fish 50-80lb tackle for swordfish at night. So if we hook a good one, we might be there awhile. We fish 16 miles off Port Everglades, it usually takes us about 1 hour to reach the Swordfish Grounds.

We now offer a Swordfish trip that gives you the best of both worlds, a trip which will show you all tactics in one trip. Fishing the afternoon for swordfish with daytime tactics (fishing on the bottom) and then as dusk approaches. Quickly switching our tactics to Night Fishing (upper water column).